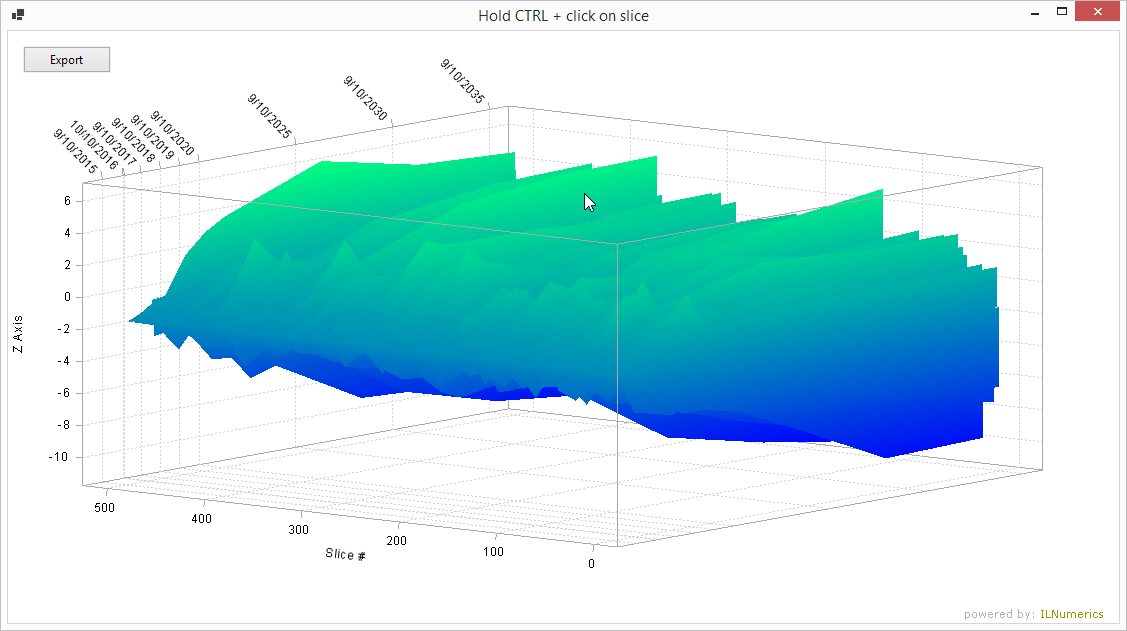 This example demonstrates a custom data visualization method with several advanced and semi-advanced aspects of ILNumerics Visualization Engine. At first, CSV data are read in. They contain dates and measurement data which are visualized as vertical slices, oriented axis aligned and parallel to the Y-Z plane. The slices are efficiently rendered using a single triangle strips shape (TrianglesStrip) without index buffer. The setup of the vertices positions buffer is conveniently done with very little n-dim array massaging, using the subarray features of ILNumerics n-dim arrays. Here, a 4-dimensional array is used to configure all vertices at once.

Individual slices are colored according to a colormap.

The user can hold down the CTRL key and click on any slice. This triggers a picking operation. As a result, the slice is determined and its index is displayed in the title of the form.

Clicking the button [Export] exports the scene currently shown as PNG image. Here, the _synched_ scene currently shown is exported. In other scenarios, such as web applications, one would use a similar scheme to provide an arbitrary scene to an GDIDriver for rendering to an image file and subsequent delivering via the webserver.

An alternative rendering can be activated: instead of filled slices, only data limits are rendered for each slice, using simple lines. The slices can still be selected (picked) by clicking on a line. A compiler #define directive is used to activate lines instead of triangles: FILLEDSLICE. By default, triangles are rendered.