See this changelog for a quick list of all changes in version 4.13. Here we dive into some details about specific topics.

The main goal of the GDI renderer is still to provide a fully compatible alternative to the OpenGL renderer. It automatically replaces the OpenGL default renderer if a problem / incompatible hardware etc. was detected at runtime. The focus lays on feature completeness and precision of the rendering result. The quality of the GDI renderer has been further improved to these regards in 4.13. Changes affect the following low level rendering features.

Lines now recognize the ILLines.Antialiasing property for thick lines (Width > 2). The antialised rendering works in all situations: transparent lines, lines with stipple patterns, inside /outside of plot cubes and for logartithmic / linear axis scales. The quality of the antialiasing implementation is now on par with common OpenGL implementations.

Note, that some OpenGL drivers actually refuse to render certain combinations of line properties. We experienced such behavior for stippled, thick line strips having antialiased rendering configured. In such situations you should make sure to have the most recent OpenGL / graphics card drivers installed. Alternatively you may chose either stippled pattern – / or antialiased rendering by explicitly configuring your lines for either one setting. Or use the GDI renderer instead.

Following is a screenshot of some lines examples. The left side shows the OpenGL renderer result. On the right side the GDI version is shown. Use your browser to show the full, unscaled image (right click on the image): 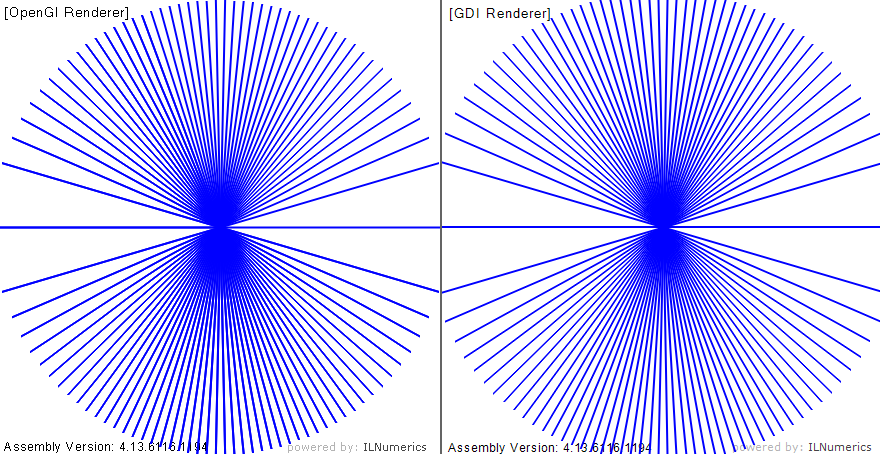 … and with dotted lines: 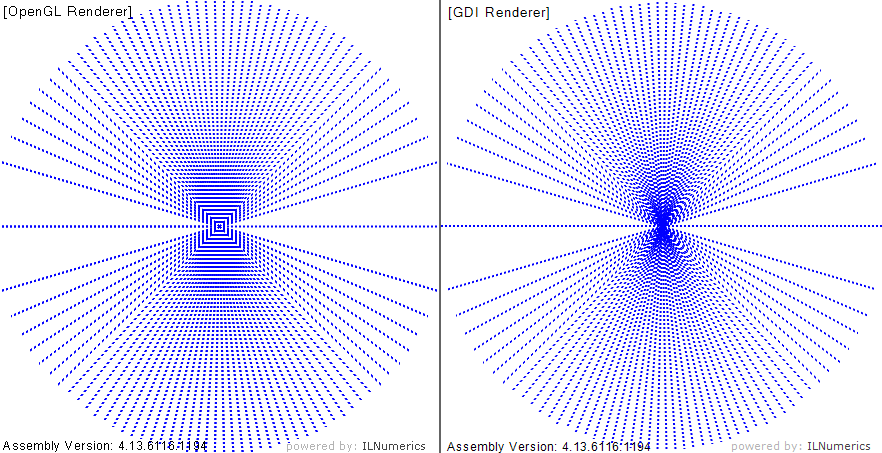 Basic, low level line shapes are now created with a default color: black. Higher level objects (as ILLinePlot, ILSplinePlot, Markers, ILSurface etc.) should always provide a color for low-level objects or use vertex based coloring explicitly. If you are assembling your scene with the low level line objects make sure to check that you have done this. This is not a breaking change.

Note that the setting for the shapes Color property overrides the vertex colors buffer (Colors property). In order to use vertex based coloring one must set the Color property to null, enabling the colors information from the Colors buffer.

ILSplinePlot (derived from ILLinePlot) now adopts the auto-coloring feature from the ILLinePlot class. When no line color was given at the time the plot was created the color gets assigned which comes next in the ILLinePlot.NextColor color enumeration. Use the linecolor constructor argument of ILSplinePlot or the Line.Color property in order to control the color of the spline line explicitly.

In earlier versions the default ILCamera.ZFar value was 1000 which led to depth buffer precision issues in some situations. The new default value of 100 increases the depth buffer precision significantly. However, the new value (just like the old one) does not take into account the actual depth of your scene! If you encounter unwanted clipping in the far clippping area now, set the value for scene.Camera.ZFar explicitly. At best you know the depth of your scene and use this value. Or – more simple – use the old default of 1000:

With the new version ILNumerics installs into the great, fresh new Visual Studio 2017 (released March 2017). … well, at least ‘kind of’…  What is true is that with 4.13 you can again use ILNumerics in all recent Visual Studio editions supporting extensions at all (which is all editions except Express Edition – I wonder if anyone is using this, still??), including Visual Studio 2017 Community Edition. This is great and all … but:

As you noticed there was a great deal of changes coming with VS2017. This includes the installer system which is – great attempt! – much more slim now by omitting unneeded stuff from the installation. But VS2017 also requires changes to the manifest files facilitating every Visual Studio Extensibility project. A new version has been introduced: version3. This is the first version which is not compatible with Visual Studio 2010 anymore. As a consequence, by supporting the new extension packaging system we would be required to drop support for Visual Studio 2010. This is not too dramatic since the 6 years VS2010 is out now feel kind of an eternity in our dev-world. However, we wanted to give the remaining VS2010 customers at least one version iteration of deprecating VS2010 in order to jump to a more recent version smoothly.

Additionally, the way the new VS installer works seems to reflect not the last word spoken on that topic (at least this is what we hope). The bottom line: we use an MSI installer, wrapped in an exe bootstrapper. The MSI installs all GAC binaries, registers the development dlls in Visual Studio, maintains the singleton installation directory and triggers the VSIX installer which installs the extension into all supported Visual Studio installations located on the system. This may sound complicated but worked quite reliably over the years.

Now, with the new Visual Studio package system things become odd. Out of subtle reasons, the MSI cannot (reliably) trigger the VSIX package automatically (and quietly). The reason becomes obvious when considering that the new extension potentially needs to trigger the installation of new components which it depends on. This install would not be possible while the hosting MSI is being installed itself still. So, as a consequence, currently, MSI installs of VSIX extensions into VS2017 are simply not working. When you start the ILNumerics installation from the delivered *.exe you will find the extension being installed into VS2010 and upwards – with the exception of Visual Studio 2017

Currently, some smart (WIX) people are attempting a solution to this. But we are not aware of a clean solution released already. Therefore, we will wait for it and/or eventually consider a new deployment scheme for our extensions.

However, luckily there is a simple workaround for now! After the ILNumerics installation was finished, you can easily install our extension into VS2017 manually. Just go to the installation folder (by default: C:\Program Files (x86)\ILNumerics\ILNumerics Ultimate VS\bin) and find the ‘ILNumerics.VSExtension.vsix’ file. Double click on it to start the installation into the remaining Visual Studio instances manually. This should work without problems. Be sure to accept the warning dialog during the install. It originates from the fact that our extension must still support older Visual Studio extension techniques.

Keep in mind that this is a workaround, though! Once installed the extension will work as expected. But some things will not work consistentyl. Deinstallation, for example must be done manually from the “Extensions and Tools” dialog within Visual Studio 2017:

Also, in difference to the machine wide installation done by the (administrative) MSI install the manual VSIX installation changes the local user account only. You may have to repeat the VSIX install for other user accounts. Besides these lowered installation experience we know of no other incompatibilities in Visual Studio 2017.

END_OF_DOCUMENT_TOKEN_TO_BE_REPLACED

As of yesterday the ILNumerics Optimization Toolbox is out and online! It’s been quite a challenge to bring everything together: some of the best algorithms, the convenience you as a user of ILNumerics expect and deserve, and the high performance requirements ILNumerics sets the scale on for. We believe that all these goals could be achieved quite greatly.

END_OF_DOCUMENT_TOKEN_TO_BE_REPLACED

Did you ever miss a certain feature in your ILNumerics scene graph? You probably did. But did you know, that most of the missing “features” mean nothing more than a missing “property”? Often enough, there is only a convenient access to a certain scene graph object needed in order to finalize a required configuration.

Recently, a user asked how to turn the background of a legend object in ILNumerics plots transparent. There doesn’t seem to be a straight forward way to that. One might expect code like the following to work:

END_OF_DOCUMENT_TOKEN_TO_BE_REPLACED

Update: Since ILNumerics Ultimate VS version 4 this issue has been solved once for all. Simply install the MSI installer and find the ILNumerics ILPanel in the toolbox for all applicable situations.

That’s what a post on Stack Overflow from earlier this year was about: A developer who wanted to use our C# math library for 3d visualizations and simulations wasn’t able to access the ILNumerics controls. “How can I locate it?”, he was wondering. “Do I have to make some changes to my VS?”

If the ILNumerics Ultimate VS math library is installed on a system, normally the ILNumerics controls are automatically listed in the Visual Studio toolbox on all supported versions of Visual Studio. However, if that’s not the case there’s a way to a add them manually: After clicking right onto the toolbox, you can select “Choose Item”. The dialog allows you to select the assambly to load the controls from – that’s it! You will find the ILNumerics.dll in the installation folder on your system. By default this directory is located at:  “C:\Program Files (x86)\ILNumerics\ILNumerics Ultimate VS\bin\ILNumerics.dll”.

However, if that doesn’t work straightaway, it often helps to clear the toolbox from any copies of custom controls before – simply right-click it and choose “Reset Toolbox”.

You want to know more about our math library and its installation? Check out our documentation and the Quick Start Guide! If you have any technical questions, have a look at our Support Section.