In order to improve your learning experience we have created an Interactive Web Component for all code examples within the online documentation, and View, an interactive 3D viewer for ILNumerics.

The code examples show their corresponding result above the code: 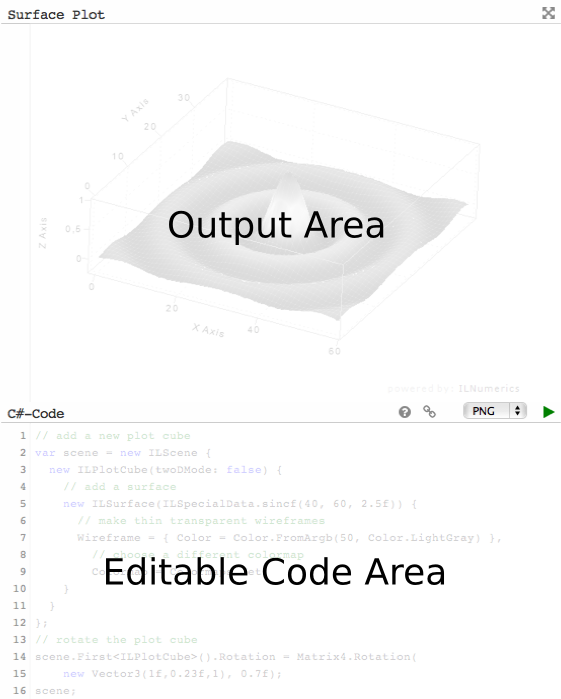 Play around with the C# code! Simply change the expressions and press the Play Button to let the component generate a new output. If you wish to generate the output in a different Output Format, select the format from the output format drop down list. Currently supported are: PNG, JPG and SVG; WebGL and EXE coming soon. Read the notes about SVG at the end of this page. 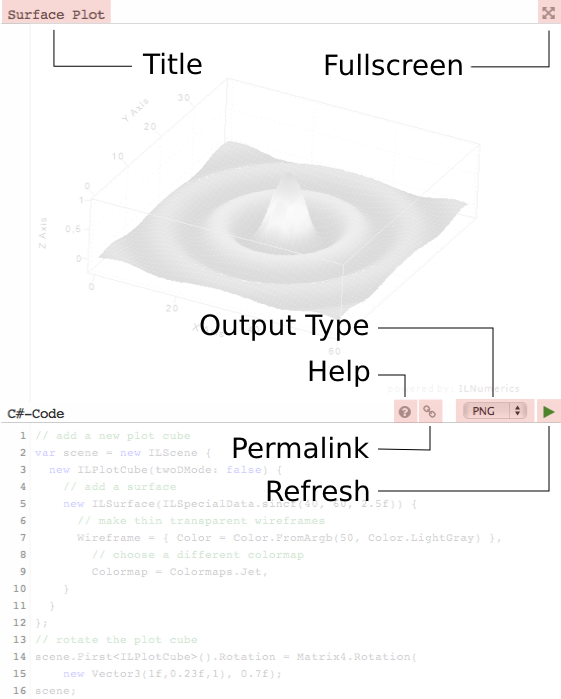 The Permalink Button in each code component allows you to share the current state of the code including all your changes and to come back to it at any later point.

Windows.Forms applications commonly utilize Windows.Forms Panel as host for arbitrary scenes. The code to setup a scene is usually placed within the Windows.Forms ilPanel1_Load handler function. During setup, the scene is assembled and assigned to the Panel.Scene property for rendering:

Alternatively, the default scene Panel.Scene can directly be used for rendering which saves the step of creating you own Scene.

In contrast to that there is no Panel in the web component. There is no form and no application either. In fact, we utilize a GDI driver for offscreen scene rendering and generate the scene on the fly.

The creation and setup of the Scene however is identical. But in order to determine the correct scene for rendering, the web code component follows a simple convention: it displays the object which is generated by the last expression of the code snippet. To display a scene we only have to make sure that the scene is the return value of the last expression:

Keep that difference in mind when transfering code examples between web components and your Windows.Forms applications:

Errors produced by the compilation step are displayed above the code – instead of the result. Read the error messages, fix the code and try again by pressing the play button!

The web code component currently supports the following output types: PNG, JPG and SVG (a WebGL driver is available in a beta state). Like always, each format comes with its own advantages and disadvantages. Disadvantages for pixel formats include the fixed pixel size. Simple 2D plots (line plots, contour plots) commonly look much better in a vector format like SVG.

SVG on the other hand is inherently designed for 2D output. When rendering complex 3D scenes, SVG introduces its own disadvantages:

ILNumerics does its best to circumvent these disadvantages. However, consider using one of the other formats if you encounter any of the above problems with SVG.

In order to give full access to our visualization examples, we have created View – a lightweight 3D viewer and interactive REPL for ILNumerics. It allows the visualization of arbitrary 3D scenes in a small and lightweight .NET application.

View is a .NET application. It runs on all supporting platforms for .NET CLR 4.0 or mono. We have tried to keep the GUI as simple as possible, in order to minimize platform specific issues. The initial state of the GUI does not use any fancy docking windows or the like. It runs unmmodified on all major Windows and Linux distributions without further dependencies.

To download View, chose EXE as output format of any example in the visualization section of our documentation and push the green play button. The current scene and View will be downloaded to your local machine.

Further scenes can be fetched from arbitrary URIs, provided as ILC# (permalinks from the official ILNumerics project site) or interactively defined.

View is provided as is. No guarantees are made by ILNumerics that it serves a specific purpose or functions in any 'correct' way! This is free software (GPL) - no support is given for it.

View comes with a C# interactive console that can be used to modify 3D scenes interactively. Furthermore it's a general computing REPL for the evaluation of arbitrary computational expressions.

The C# Interactive Console (REPL) allows the evaluation of arbitrary C# expressions on the fly. That means: It accepts individual valid expressions without the need to wrap them in a full class context. Just enter the expressions in the command line, and they will be wrapped by the compiler and executed. A text output displays the result immediately on the command line.

The evaluation is triggered when the Enter key is pressed. Multiple lines are spanned by pressing Space + Enter together. The Up key iteratively steps through the entries in the list of earlier expressions history. A (by now yet limited) set of code completions is provided automatically while entering expressions. Marking of text areas, copy and paste of text is working the regular way. The use of a trailing semicolon ';' is optional.

The C# Interactive Console allows arbitrary modifications to the scene being displayed in the main window. It exposes the panel of the main window via the Panel property and may be used to alter any property of the panel, including the Panel.Scene:

Of course, all regular C# expressions are allowed, which reference any .NET type or namespace. By default, the following namespaces are included:

More namespaces can be included at any point (and not necessarily at the beginning of the session) on the command line. Furthermore, all members of the ILNumerics.ILMath class are directly accessible, without the need to specify the ILMath class. All common rules for writing functions and handling arrays in ILNumerics apply:

View is intended as community project: Learn more at the official View GitHub Repository! There will be no support for View!