A single common function serves as the API entry point for all constrained minimization algorithms:

In order to solve a constrained minimization problem, users must specify

Bound constraints restrict the solution to a range within lower and upper bounds. The bounds $lb$ and $ub$ are defined by use of the lowerBound and upperBound parameters to Optimization.fmin. Both are optional parameters: it is possible to define none, one, or both. Undefined bounds correspond to double.MinValue and double.MaxValue respectively.

We target a minimum in the range [2...3] which does not include the true minimum at 1. In C# the problem is solved as follows:

A shorter form might use lamda expressions for the objective function:

This finds the minimum of $f$ inside the defined bounds: 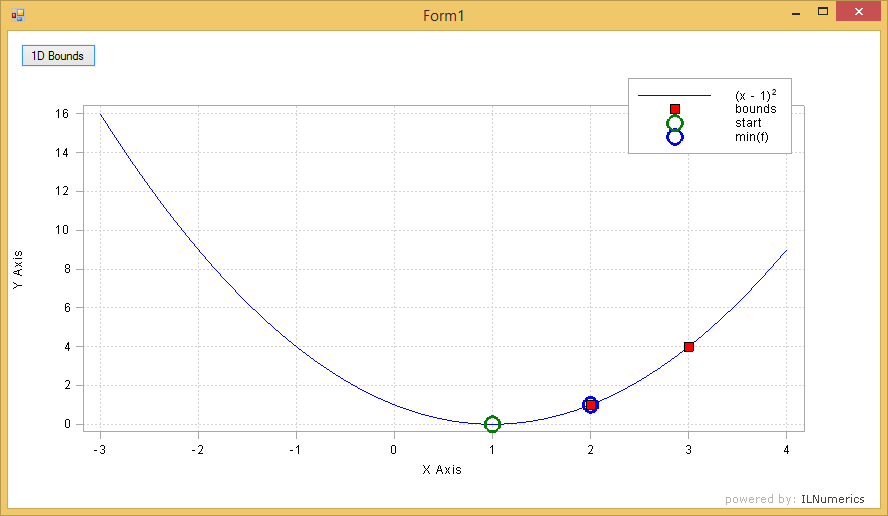 This example is part of a larger example which can be downloaded from the examples section.

Equalty constraints are defined as

The complete example from the examples section plots the objective function, the equalty constraint, intermediate positions on the path to the result and the computed minimizer: 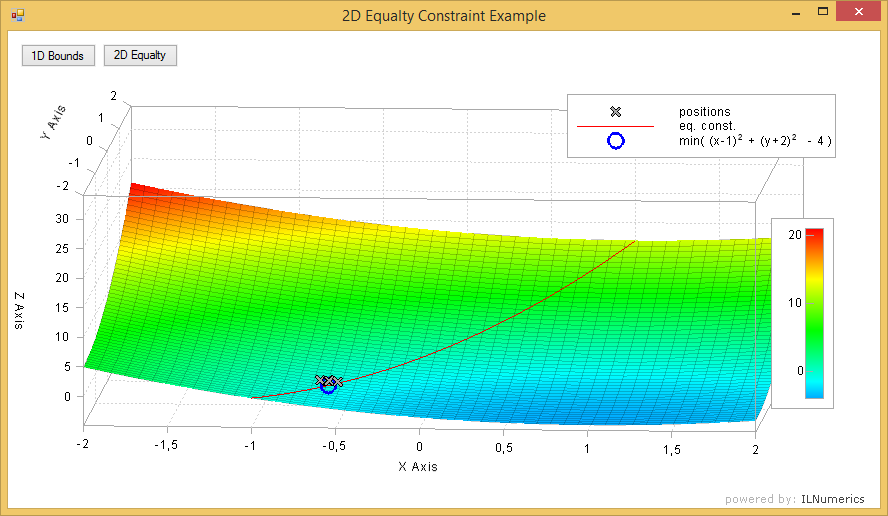 Note how the objective function myFunc2DEqual was defined in vectorial form here. This gives more options for plotting purposes and further handling, since it allows the evaluation of multiple datapoints at the same time. Hoewever, for the minimizer computation, vectorization is not necessary! All minimization algorithms are guaranteed to call the objective function with a single (intermediate) position vector only. Thus, the function could have been defined in scalar form:

The third type of constrained minimization problems is defined as:

This limits the feasible set of solutions to a certain definition range. Again, in order to be usefull, the inequalty constraint must be implemented in the form $ineq(x) = \vec0$ and reformulated, if necessary.

We state the optimization problem

Here, the solution is constrained to the circle area around the point [1,1] with the radius 1. In order to implement the inequalty constraint function we reformulate:

and implement the problem:

After 3 iterations the solution is found at the edge of the circle area described by the inequalty constraint:

The complete example can be downloaded from the examples section.

All types of constraints can be combined arbitrarily. We could add bound constraints to the inequalty constraint example above and limit the solution to the subpart of the circle where $x_1 \le 1.5$.

The following options exist for influencing the progress of the algorithm:

Optimization.fmin provides three parameters which are used to get extended information about the algorithm run. The iterations and the gradientNorm parameters provide the intermediate solutions and the norm of the Lagrangian gradient from each major iteration step - after the function returns. Their application is identical to the corresponding parameters in Unconstrained Optimization.

The callback parameter expects a user defined function with the following signature:

The FminCallbackInfo class provides a number of readonly properties which describe the current iteration step:

Optimization.fmin currently is not able to solve the following special problems:

ILNumerics.Optimization.fmin() reformulates the provided constrained problem into an unconstrained one. The Powell-Hestenes-Rockafellar augmented lagrangian multiplier method turns the objective function into a modified version which penalizes violations of the constraints. Each iteration step for fmin() solves an unconstrained optimization problem for finding the minimum of the Lagrangian function. With feasible constraints defined, the objective function is not required to be non-linear.

All unconstrained optimization solvers can be used to find the minimimum of the Lagrangian in each iteration. BFGS is the most popular one here. Bound constraints are not taken into account by considering them as inequalty constraints. Rather the intermediate solutions are projected onto the given bounds in each iteration step.