Lighting often enhances three dimensional scenes for a better overview and more realistic impressions. light sources can be used in ILNumerics scenes. Each light is represented by instances of and stores its own position as well as several other parameters. Once a light is activated, it will influence all visual objects, capable of handling lights. By default, one light exists for each camera object.

ILNumerics Visualization Engine does not distinguish between `lit objects` and `unlit objects`. All basic shapes that create an area, which potentially could reflect light are `litable`. Those objects are: Triangles, TrianglesFan and TrianglesStrip. Lines and Points are not litable. 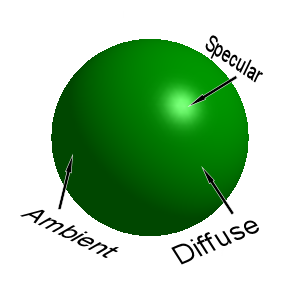 As common for any rendering engine, four types of light influence the lit experience for lit objects:

The final result is produced by individually computing all light components and adding them up. In order to read more about the general functioning of lights and the internals of light computations, visit the OpenGL official specification and/or the lighting articles on glprogramming.com.

Currently, there is only one light object in ILNumerics Visualization Engine: PointLight. Point lights simulate a common light source like a bulb or the sun. Such lights have a position, a color and an intensity. However, they do not have an extent, hence, they are considered to be infinitesimal small points.

Lights in ILNumerics Visualization Engine act like regular scene objects. They derive from Node, are placed in group nodes and transformed by their common translation and rotation properties. For interactive or dynamic scenes, the placement of the light determines whether the light is going to move with the objects or stays stationary.

If you want the light to move with the object, just place the light into the same group node as the object. For global lights, enabling the objects to be rotated and shined on from all sides – place the lights outside of the camera node responsible for rotation.

For lighting to work correctly, every lit vertex needs an indication of the orientation of its surface normal. In order to find this orientation, a normal vector for every vertex is used. Normal vectors can be created automatically in most situations.The normals for each vertex are created by taking the normal vectors of all faces sharing that vertex into account and averaging over their orientations. Automatic normals are created for all triangle shapes, if the Shape.AutoNormals property is true (default).

If needed, the user can manually compute normals and provide them to the Shape.Normals buffer. AutoNormals should be set to false in that case, in order to prevent from automatically overriding custom normals on updates to the shape. The format of the normals buffer is similar to the format of the Positions buffer: Each vertex is represented by a column in a 3 x n matrix, where n is the number of vertices used in the shape.

All lights in a scene are global. This means, regardless of the scene node a light was placed into, it will affect all visible objects. The intensity of a color caused by a light directly corresponds to the distance of the light from the shape (recall that all lights in ILNumerics Visualization Engine by now are point lights), and from the intensity of the light. In order to simplify the setup of a lit scene, ILNumerics Visualization Engine implements a relative intensity lighting model. There is no absolute value for the light intensity. Rather the intensities of all lights will be taken into account and the rendering result will reflect the configuration of relative intensities. Lights with a high value for Light.Intensity will get more influence on the final color of a shape than those with lower intensity.

ILNumerics creates a single light for each scene by default. The light is placed in a separate group node with the tag "".

The following example demonstrates various features in conjunction with lit scenes. It creates a simple scene consisting out of a gray gear shape and a gray, transparent hemisphere. The hemisphere is configured with a nice yellow emission color. A blue light is added to the default light of the scene. The user can drag the blue light around with the mouse in order to learn the various effects of the positioning. Double clicking on the blue light (actually on the blue point shape marking the light position, since all lights are invisible) will toogle the light on and off. 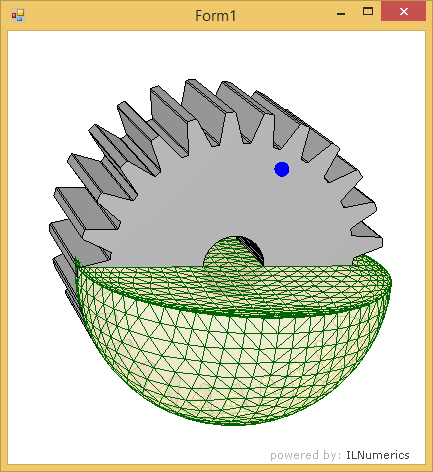 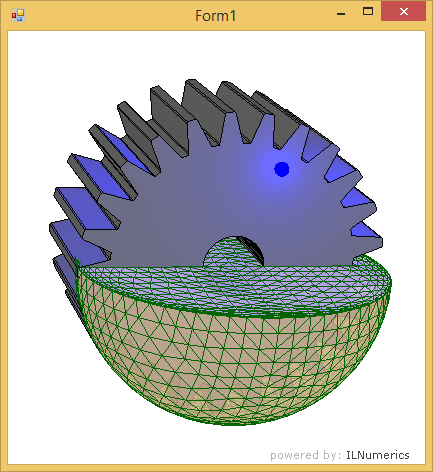 The example demonstrates the influence of the distance of lights to shapes and the effect of global illumination: the overall scene light is greatly dimmed by switching on the additional blue light.

It is also clearly visible from the example that the lighting scheme will not always create the same visual result one might expect from real-world experiences. ILNumerics Visualization Engine focuses on a simple setup rather than reaching for foto-realistic scenes. For latter, additional features would be needed: shadows and textures being only two of them. However, for most technical scenes, the simple lighting model brings the advantage of fewer / no configuration necessary for creating a good sense of 3D geometry and great performance for complex scenes.